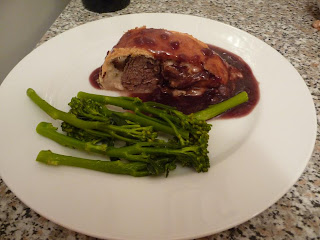 You asked for it, so I made it… beef wellington with red wine gravy. A proper manly dish with oomph!!
I decided to ask people on Twitter and Facebook what dishes they wanted me to try and then blog about, and beef wellington came top of the list.
To be honest I’ve wanted to give this a go for ages. I’ve seen Simon Rimmer on Something for The Weekend and James Martin on Saturday Kitchen do it as I’ve drooled over my bowl of muesli, but I always thought it looked too difficult. Plus, I wasn’t a massive red meat lover... that was until I tried my beef wellington and turned into a carnivore over night.
I know I always say this, but it was really easy to make. The only difficulty is knowing when the beef is cooked just right as it’s wrapped in a huge blanket of pastry that browns really quickly.
The recipe says 20 minutes but I put it in for longer as I was using the old broken oven that had to be gaffer-taped shut (which has now been replaced with a shiny new one thanks to engagement money!!).
I did however leave it in a minute too long so it wasn’t as pink as some would like it, although for me it was just right because the meat was still really tender. In fact it wasn’t just tender, it was juicy and gorgeous and we ate the whole thing, drenched in red wine gravy.
This isn’t a traditional beef wellington because it uses goats’ cheese instead of paté but I like to try new things. I thought the paté would be too rich and after all the rich food and booze over Christmas I’m still feeling like I could develop gout at any moment.
Serve with broccoli (for colour and so you feel like you’re doing something healthy) and a glass of the red wine used in the gravy and this is a winner.
Ladies, I would suggest this is a great dish for your man on Valentine’s Day! (Unless he’s a veggie of course).
Next on the list of things you asked for is lemon meringue pie!
Don't forget to follow me on Twitter @SarahLPoole

Ingredients
300g beef fillet
1 tbsp olive oil
salt and freshly ground black pepper
200g ready-rolled puff pastry
100g firm goats' cheese, sliced
1 beaten free-range egg
For the red wine sauce
1 tbsp olive oil
half a small red onion, finely sliced
pinch of sugar
150ml red wine
75ml hot beef stock
½ tsp cornflour
Method
1. Preheat the oven to 230C/450F/Gas 8.
2. Rub the beef fillet with olive oil and season well with salt and freshly ground black pepper.
3. Heat a frying pan until smoking hot and cook the beef until golden brown on both sides but not cooked through. Set aside and leave to rest for ten minutes.
4. Place the puff pastry onto a floured work surface and place the beef on top with a layer of goats' cheese slices. Wrap the pastry over the beef to make a parcel and brush all over with beaten egg.
5. Transfer to the oven and bake for 15 minutes, or until the pastry is golden-brown and the beef is cooked to your liking.
6. Meanwhile, for the red wine sauce, heat the olive oil in a saucepan, add the onion and cook gently until softened.
7. Add the sugar and red wine and bring to the boil. Boil until the liquid has reduced by half. Add the stock and simmer for five minutes.
8. Mix the cornflour with a bit of cold water to make a paste, then whisk into the sauce. Cook for 2-3 minutes until thickened slightly.
9. To serve, cut the beef Wellington into slices and place onto serving plates. Pour over the red wine sauce and serve with vegetables of your choice.
Posted by Sarah Poole at 07:03 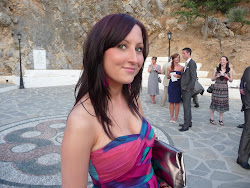 Sarah Poole
Leigh, Greater Manchester, United Kingdom
I don’t claim to be a good cook by any stretch of the imagination but I love food and I love cooking. When I’m eating breakfast I’m thinking about lunch, and when I’m eating lunch I’m thinking about what I can make for dinner. I’m a little bit obsessed with cookery programmes and I love nothing more than going for a nice meal and couple of glasses (or bottles) of wine. I’m not ashamed to say that if I had to choose, I’d sacrifice a starter for a pudding any day - I have an incredibly sweet tooth which I get from my dad who drinks dessert wine like it’s water. But what makes me smile is hearing that “mmm” sound when someone tries my food!